A Food Policy for Canada: Report of the Standing Committee on Agriculture and Agri-Food 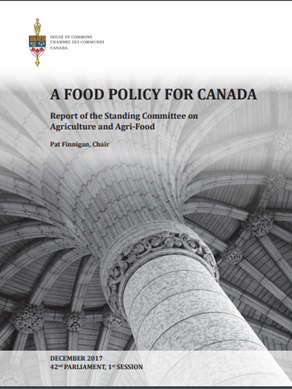 Report of the Standing Committee on Agriculture and Agri-Food

CLERK OF THE COMMITTEE Marc-Olivier Girard

On 19 September 2017, the House of Commons Standing Committee on Agriculture and Agri-Food began a study on a first food policy for Canada, which is being developed by the Minister of Agriculture and Agri-Food and will be implemented over the coming year. The goals of this policy are to produce safe, nutritious, and affordable food in an environmentally friendly way. During the course of its study, the Committee heard 52 witnesses and received 14 briefs.

This report focuses on the four broad food policy themes set out by the Minister of Agriculture and Agri-Food. In addition to these themes, the Committee believes that the food policy should also take into account the following issues: the next generation of farmers, access to farmland and farm labour.

The Committee recognizes that the issue of food is of interest to a broad range of stakeholders who have different points of view. This poses a great challenge in terms of policy implementation. To achieve the pursued goals, the Committee believes policy development should focus on a whole-of-government approach and close collaboration among stakeholders including farmers, ranchers, fishers, food processers, consumers, and civil society.

The report also contains recommendations for the successful implementation of the food policy. The Committee’s recommendations include establishing a governance structure, supporting the next generation of young farmers, supporting the growth and development of local and regional agriculture and helping Canadian companies access foreign markets. In addition, the Committee believes that this first food policy will bring producers and consumers closer together to help them produce food responsibly, in a manner that respects the environment and animal welfare

END_OF_DOCUMENT_TOKEN_TO_BE_REPLACED

Towards an Eco-Asset Strategy in the Town of Gibsons

Defining and Scoping Municipal Natural Assets
Back to top